Lubricant Properties as a Function of Temperature

Instead of defining the melting point, lubricants are described by determining the pour point .  The description has room for interpretation and ASTM D97 does not have good repeatability.  There are other methods to capture this characteristic, like using a rheometer to measure the viscosity as the temperature decreases.  This method requires the pour point to be an apparent viscosity that has been declared or agreed upon prior to the test being run.  Below is a graph of data collected on Tribosyn® 612-32.  This oil is approximately 32 cP at 40°C.  The viscosity at ambient is so low that the device that was used to collect the data did not detect enough resistance to report a nonzero value until the oil was below -35°C. 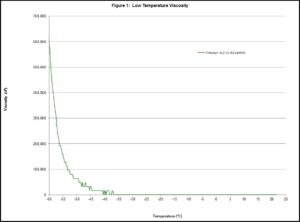 The viscosity of a lubricant decreases as temperature increases.  The viscosity index (VI) of a lubricant is a number derived from the behavior of a standard naphthenic at zero to 100 for standard parafinnic oil.  The higher the VI, the less the oil changes as temperature changes.  Many synthetic oils have VI that fall outside of the zero to 100 range.  The viscosity of oils can be predicted with two data points as long as the data and predictions are not close to the pour point.  Because some of the lubricant is lost at high temperatures, the composition changes over time.  That will affect the viscosity even if no other reactions occur like oxidation and/or thermal decomposition.